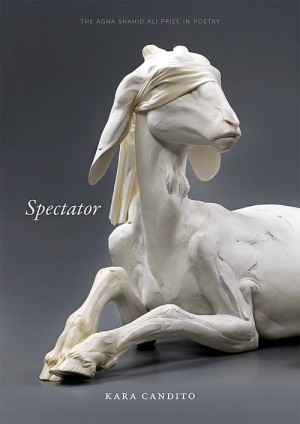 May 2014 Rumpus Poetry Book Club Book of the Month

“In the waiting room of the third government office, / you will invent your own religion,” writes Candito in “Ars Amatoria: So You Want to Marry a Foreign National,” a tragicomic sequence written in Roman-numeric fragments reminiscent of an official document’s formatting. Interspersed with moments of lyric urgency, Spectator charts the plural self’s course through a world of airplane travel, drug wars, and customs forms. The book becomes an homage to anyone who’s been displaced or redefined by bureaucratic systems of power

“The fluidity of the writing, the lift of the heart, the self-deprecating humor, and the aggregate of the understated losses add up to, in Kara Candito’s second collection, a kind of brilliance and readability all too rare. These new poems are alive with the personality and honesty of a young poet at the beginning of true art.”

“Spectator has a subversive heart: a series of poems about a Mexican and an American in love. These ravenous poems cross many emotional and aesthetic borders. They’re surreal, tender, meta, political, impressionistic, and angry. Kara Candito has enlarged the contemporary love poem. This is vital and startling work.”

“Smart and romantic indeed.  Also clever and lyrical and insightful.”